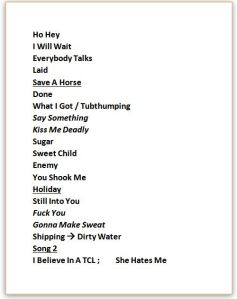 I know the graphics are always left-justified, but that ruined the bulleted list of songs. As they say in the old country, “Atsa the way it goes.”

Here’s a (fun?) project: Go see a set or two from few local cover bands, which is something I recommend you do, anyway. Next time, take note of which songs they play. Chances are good you’ll hear a few of the following:

I would’ve listed the artists and linked to the songs, but you already know all of them.

That’s not to say those are lousy songs–except Kid Rock should spend an evening with Jack Bauer, a tub full of water, jumper cables, and a car battery. The fact is that many people like to go out to hear songs they already know. If that gets them on the dance floor, well, that’s what we’re aiming for, innit? When people dance, they get thirsty. When they get thirsty, the bar makes money. When the bar makes money, they’re happy. And when the bar is happy, the band will be asked back.

The trick is to play just a few of the above standards at a gig. And of course, two bands probably won’t sound exactly the same playing the same song. In fact, sometimes a band will have their own interpretation of a song. For example, we boosted the tempo on most of the painfully slow ballad “Say Something” and it went over well. We did a similar rhythm adjustment on Alex Clare’s “Too Close” with similar results (the original was used in an Internet Explorer ad). We also do “Jessie’s Girl” without the synth, because sometimes playing bass is more fun.

About 5 years ago, I was in The Skinny Ties, which covered tunes from the New Wave era. When MTV began, it actually played Music, kids. Good music, too. So we played a lot of Cars, Cheap Trick, some Pretenders, etc. In addition to the hits, we did songs like “I Ran” (Flock of Seagulls), “Major Tom” (Peter Schilling), and “Whip It” (Devo), and “My Sharona” (The Knack; “I’ve practiced the solo for 30 years and I’ve just about got it”). Not a “Brown Eyed Girl” in that bunch.

So get out there and support live music…and see how many of the above songs you hear.

This entry was posted in Uncategorized. Bookmark the permalink.